Thought of something cool. Yes, I know i've been walking all over this, but i've thought long and hard. Here's what I got

Anyway, I have been messing around with the Barabus G800, and am appalled at how well rounded its stats are. it’s defense is a good deal above average for a tier 1, and its FAST AS HELL. for what it is anyway. It beats the mustang which is 13.9 I think, this is an insane 14.2
I thought this would be awesome if moved down to beginner as a tier 1 VIP, here is my logical statement as to why.
First, the illogical, but funny bit. It looks like a little terrain destroyer imo. It looks like the son of the terrain destroyer. And of course being the son, it is going to be a hell of a lot faster. However sacrificing a wee bit of durability (This thing is 101 the TD is 137)

Ok. Logical part.
Everyone tells me this is an OP idea (the few ive told in-game) but here goes
ok so you know the traits of the VIP vehicles of beginner derby…the Mustang, being the fastest (but barely) the terrain destroyer being the most durable (minus the cherry bomb engine) and the dodge dart probably having the best overall speed/handling combo. This, if this was moved down to beginner as the final thing, or maybe beside the terrain destroyer in the 3 million range as a tier 1, it has a similar durability of the terrrain destroyer, not to mention it has the 6x6 config the TD has, which is awesome.
It is in fact a good deal faster than everything in beginner, at a whopping 14.2 a bit faster than mustang, which is 13.9
See what i am getting at? A strong all-rounder of the VIP sequel in beginner, combining all of their strong traits, while still being killable, albiet very difficult if it is in good hands. It should be a robust all-rounder of the VIP traits, not one thing or the other. (the final VIP thing of beginner)
The one right now, is strong durability wise. It is hard to kill, unless it gets hit in the face. But its slow as mud, handling is sluggish, and its enormous. Basically a punching bag. Its only durable and sucks at everything else. It’s not an all trades vehicle like the Barabus is. I chose the barabus for this idea due to its stats and very similar build to that of the terrain destroyer, despite it branching from a different vehicle. Any thoughts? 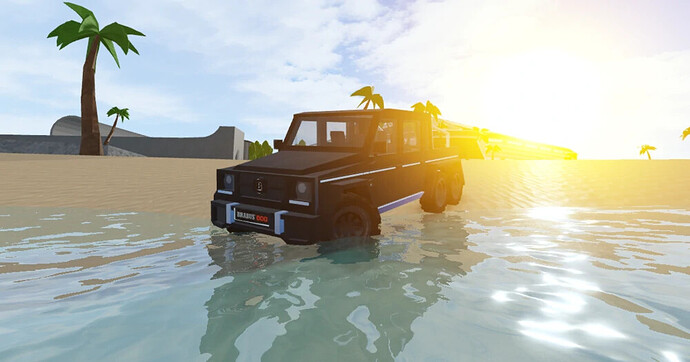 Lol i got alot of cars that are basic beginner cars fully customized. I destroyed a pro lambo guy and a f1 car with the morris mini… Im so happy rn

Eh??? What is your point

im actually wanting this to go somewhere, not splotched with nonsensical comments. I actually want the devs to see this and at least look at it. I think it is a fantastic idea to move this down as a brother to the terrain destroyer

This is one of those vehicles that isnt very good in experienced, but would absolutely shine in beginner

I am a demon on the track with underpowered cars