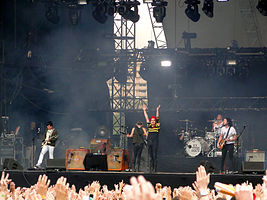 My Chemical Romance (commonly abbreviated to MCR or My Chem) is an American rock band from Newark, New Jersey. The band's current lineup consists of lead vocalist Gerard Way, lead guitarist Ray Toro, rhythm guitarist Frank Iero, and bassist Mikey Way. They are considered one of the most influential rock groups of the 2000s and a major act in the pop-punk and emo genres, despite the band rejecting the latter label. Founded on September 12, 2001, by Gerard, Mikey, Toro, and drummer Matt Pelissie...

This is good band
Epic songs and style

How do u get wiki editor aaaaaaa

How do u get wiki editor aaaaaaa

(i was being stupid) when i first clicked on this i thought it was actually a “chemical romance”. lol