Then why would this be added as a tank

this is a hybird of tank and car, so its special 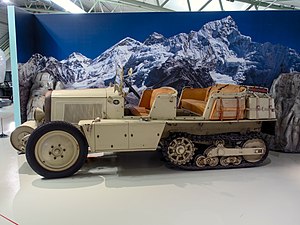 A half-track is a civilian or military vehicle with regular wheels at the front for steering and continuous tracks at the back to propel the vehicle and carry most of the load. The purpose of this combination is to produce a vehicle with the cross-country capabilities of a tank and the handling of a wheeled vehicle. The main advantage of half-tracks over wheeled vehicles is that the tracks reduce the pressure on any given area of the ground by spreading the vehicle's weight over a larger area, w...

Yeh its a half track bro

Half tracks have the ability to have guns mounted