What is the bug?
A bug in which the dealership timer completely stops, even though after the period you can respawn the car.

How often does the bug happen? (Everytime, sometimes or rarely)
Sometimes.

What device did you play on? (Computer, Phone, Tablet or Xbox)
Computer, more speciffically laptop.

Is the bug related to GUI/Interface on the screen? Or did the bug only appear for you? Check yes if the bug didn’t happen for everyone in the server at the same time.
Yes, it only usually happens to one person at a time, rarely two or three. 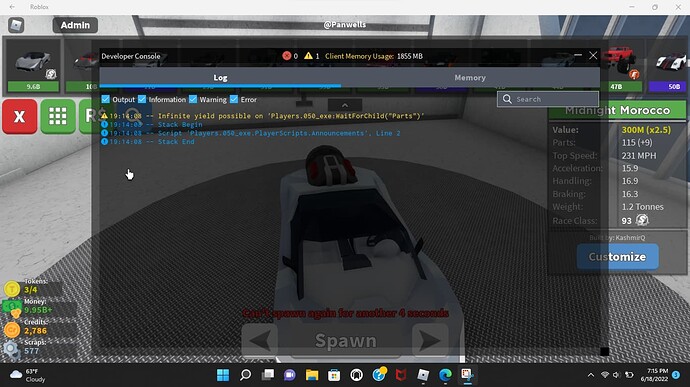 bug report21366×768 109 KB
The bug is not really noticeable because it’s more of a UI problem, Not scripting, so, you are unlikely to see errors because of the minority. and no, i did not install Infinite Yield. No, do not ask me about it. No, i am not draining 20 dollars for exploits and a virus.
I would have been banned already if i did have exploits, right?

Update: If you Destroy the car then enter the dealership at a 1 second interval, the timer will stall.

go right ahead with the criticism, not my fault you’re trying to be an absolute annoyance, to be honest i didn’t really even think this wouldn’t be able to be fixed