INFO: The Boxer GTK (in German : G epanzertes T ransport K raftfahrzeug ) or Armored Transport Vehicle or MrAV ( in English : M ulti r ole A rmoured V ehicle - Multi-role Armored Vehicle) is a multi-role armored tank , designed to carry out a series of operations through the use of operation modules such as: command post , troop transport , material and ambulance. 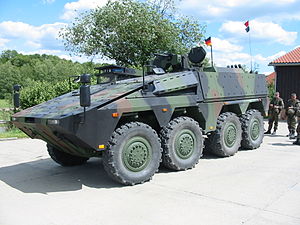 LORE: The Boxer is a European cooperative design project aimed at producing the next generation of multi-role armored vehicle . This project originally started as a consortium between Germany , England and France, but the latter left the project in 1999 , to make an all-French project vehicle, the VBCI. However, in early 2001 the Dutch government joined the Germans and British in this endeavor. But in July 2003 , shortly after the start of the Iraq War , Britain 's defense ministry announced its intention to withdraw from the Boxer project to focus on another project .Future Rapid Effect System (FRES).

The Netherlands bought around 400 Boxers, to replace the M577 and its variants in the Royal Dutch Army, the Netherlands which has already confirmed the acquisition of 200 vehicles in autumn 2006 . On December 13 , 2006 , the German parliament approved the acquisition of 272 Boxers for the German army, to replace part of its contingents of M113 and TPZ Fuchs 1 vehicles. All TPZ Fuchs 1 will be replaced by Boxers by 2020 , according to studies by the German army.

So far, 600 Boxers are expected to be delivered to the German army . On September 23 , 2009 , the first Boxer was officially handed over to the German Federal Office for Defence, Technology and Procurement. In June 2007 , the Boxer was again considered for the British Army 's FRES program .

Information or Photos were taken from google and wikipedia.