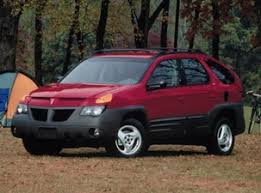 I bet you that carspoilerconsumer is gonna post here

Lol ye.
I’ll be surprised if he doesn’t.

i’m glad y’all recognize me for something

After being a Pontiac enthusiast for quite some time (still am)
Pontiac Aztek is extremely underrated SUV
they have a MASSIVE payload capacity as seen in the GVWR (subtract curb weight of vehicle from the maximum GVWR weight) and a decent towing capacity of 3500 pounds which is on par with most modern SUVs
it can also be had with AWD as well it is a very well thought out and practical car
I wouldnt mind buying one inRL despite the fun that would get poked at me for it, but these Azteks can last 400,000+ miles if maintained correctly
fuel economy for an SUV is also very good
edit: This car also gets respectable crash test ratings as well
in CC2 I would see it performing quite meh in terms of performance but it would have some level of durability and the AWD trim level would also prove very useful in the winter CC2 map and derby as well.
Thumbs up from me. Excellent car for the money.

ok, it may have some pretty cool features and it is fairly economical and practical

But the thing is, it’s 3.4L V6 engine only produces 185Hp which is absolutely nothing compared to cars from around that time

Here is another example, a 2001 Toyota Highlander uses a 3.0L V6 which is less than the Aztek and it produces 220Hp

So you see, this car is only built for practicality and maybe used for admiring for people like carspoilerconsumer, but other than that, it’s basically produces less horsepower than most cars using a V6 at that time while having a higher displacement, also it’s ugly so there’s that

I myself prefer function over form. Yeah the power is displeasing
AWD would probably improve off the line performance a tad bit though.
But yeah performance is pretty meh but it came with stuff like a built in cooler for food and a tent and tent speakers that came with the car it was extremely practical

Excellent car for the money.

It does have its cons though, DEFINITELY but I’m sure you understand my points
the power output is certainly disappointing though…not sure if it could tow its 3500 pound capacity with something with such low power output
wish GM put the 3800 series II in it, would be 5 times better

that’s definitely not the actual price of the aztek

OMG I GOT MENTIONED IN SOMETHING WTH??

wow I can’t believe you just found out rn

and he had this car even whem he had 80 million

also it’s ugly so there’s that