Design Study done in 1983 and based on the Opel Corsa platform.

At the 1983 IAA, Opel presented the Junior concept car. It was even shorter than the first generation Corsa that had just been launched one year earlier. In retrospect, the Junior can be considered the forerunner of the current individualization champion and chic urban subcompact ADAM. The Junior focused on enabling new customers - especially young people, women and inhabitants of growing urban areas - to access to individual and affordable mobility.

The compact 3-door Junior set new aerodynamic standards. The slanted nose and flush details like the recessed windshield wiper under an aerodynamic fairing helped deliver a drag coefficient of 0.31. Combined with a traverse-mounted 1.2 liter engine, a lightweight compact link rear suspension and a curb weight of only 650 kilograms, the Junior promised great fuel efficiency.

The Junior concept inspired the shape of the second Corsa generation. The design is very round and clean, with only a horizontal split line between the yellow body and the raw plastic lower body. The rear is as simple as the rest with only four horizontal bars for the tail lamps. The Junior also displayed the variability we have come to associate with the brand: The roof could be exchanged for a glass roof or convertible top.

The interior was funky, fresh and functional. It offered a range of clever ideas from easily exchangeable instruments and a visionary navigation system to seat covers that could be transformed into sleeping bags and a removable the radio cassette player and speakers for camping or a picnic. The straight dashboard was topped with uniform square modules that could be plugged in and out. Therefore giving the driver the flexibility of choosing their own layout and to allow equipment upgrades over time.

An experimental car based on the production units of the Opel-Korsa is an attempt to create a multi-purpose car for young families that would be more versatile than the station wagon. The three-door body can be easily converted from a four-seater passenger car to a single-seater cargo one. The roof panel can be removed to facilitate the transport of bulky items. The easily removable seats have upholstery that can be removed as a cover and can serve as a sleeping bag or beach mat. If necessary, the rear row of seats can be folded down, and the space behind the front seats can be fenced off with the mesh supplied with the machine. It keeps the load from sliding forward during braking. The third door in the rear wall of the body, when raised, can be folded along a horizontal line.

The dashboard is assembled from modules with universal plugs. The owner, according to his taste, can place on it instrument blocks, video and sound equipment, a clock with an alarm clock, a tachometer, and other additional equipment.

Carefully designed in terms of aerodynamics, the body has very little air resistance (Cx = 0.31). The characteristic exterior shape of the car with headlights, glass and doors flush with the main surface of the body, in combination with flat wheel caps and curved side windows, give the Opel Junior an avant-garde look that appeals to young motorists.

The magazine “Behind the wheel”

Imagine: it’s the early 1980s, you bought a new car, but you don’t like the dashboard combination. And the tachometer, in view of the automatic transmission or the ideal “feeling of the car”, is not needed at all - you just want to replace it with an extra speaker of the audio system … or an alarm clock if you suddenly have to spend the night in the car. In the case of any other car, such modifications would require the services of a tuning studio. But not in the case of Junior, which has a modular torpedo organization.

The principle is as follows: initially, the Junior dashboard is an empty rail, which is diluted in the center and along the edges by the air conditioner deflectors (by the way, they are made of reinforced rubber and are flexible enough, so they can be directed directly into the windshield and warm the “lobash” from the ice in blink of an eye). But along the entire length of this rail - both above and below - standardized connectors are applied to which you can connect various information and entertainment elements: a speedometer, a tachometer, a smoker’s unit with an ashtray and a lighter, a boombox, additional speakers, a microclimate control unit, an alarm clock … Moreover, you can arrange the elements in any order, thereby completely adjusting the interior to your needs. Don’t need a speedometer? Give it to the navigator! Do you want to listen to music outdoors? Unfastened the tape recorder - and do not deny yourself anything!

And a similar smart approach is used on Junior everywhere - not only in the design of the dashboard. For example, the odd-looking front row seats that appear to be made from old reserved seat car mattresses have padding that can be detached from the frame that can be used as a sleeping bag or soft picnic blanket. Mesh pockets on the doors also unfasten - and with them, like string bags, you can go to the store to shop.

Finally, you can pull out the back row, which is fixed to the frame, and use it as a comfortable garden sofa. In this case, the Junior turns into a small delivery van that can deliver fresh flowers or hot baked goods. To prevent the load from flying under the feet of the driver and front passenger (if there is one, the passenger seat could also be completely removed), a net could be pulled right in front of the seat backs to catch loads during braking.

But this is not all the transformation possibilities of the 3.4-meter hatchback! For the concept, imagine, there were also three options for the roof: ordinary, made of plastic; transparent - it was made of plexiglass, as well as folding, cloth - to fully enjoy the sun and stars on fine days. For the concept car, the Junior was a very thoughtful car - not every production model has so many interesting details. And all because Junior was for Opel more than just an exhibition of unusual solutions. It was a teaser for the future model.

If it seems to you that the Junior resembles some kind of model, then you do not think: the concept is based on the second generation Opel Corsa platform, which began production 10 years after the Junior debuted at the 1983 Frankfurt Motor Show. The cars have a similar design: the differences boil down to the fact that the concept was shorter than Korsa by a good 30 centimeters, plus it sported a contrasting plastic body kit that was fashionable in those years. But the rest of the relationship is obvious.

Thanks to its rounded shapes and streamlined sidewalls, the Junior had decent aerodynamics for that time (drag coefficient - 0.31), and the abundance of composite materials made it very light (curb weight - 650 kilograms). In general, the shell for the salon modules turned out to be very successful.

By the way, its author was a young American designer, for whom Junior was the first serious project. Maybe you’ve heard of this - his name … Chris Bangle! A little later he will leave to work at BMW and divide the history of the Bavarian brand into “before” and “after” … Another well-known artist, Gert Hilderbrand, who is known for his work in Volkswagen (Golf of the third generation), Mini (previous generation Countryman and Clubman) and the Israeli-Chinese company Qoros that did not really shoot.

Taking into account the originality of the exterior and interior, Opel rightly decided that it is better not to overdo it with the power plant - so as not to distract attention from the main “trump cards” and not give false hopes. Therefore, the concept received a modest 1.2-liter engine from the then Corsa, which developed 55 horsepower. Given the concept’s low weight, as well as its sophisticated aerodynamics, there is every reason to assume that the Junior’s economy was exemplary. However, the company did not provide exact numbers.

Though forgotten by many, the Junior Concept is still remembered at Opel. It periodically flashes in videos from museum stores, sometimes it is mentioned when talking about the Corsa model … Moreover, the Opel Adam subcompact hatchback, produced from 2012 to 2019, was called Junior at the development stage! Not a bad investment for a car that some people don’t even know existed. 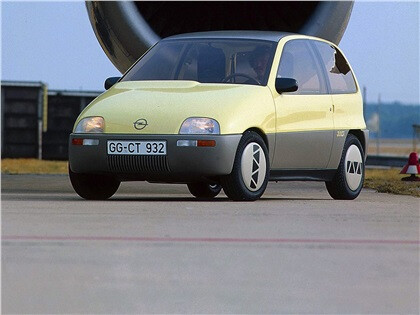 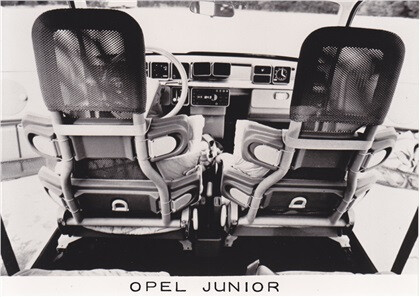 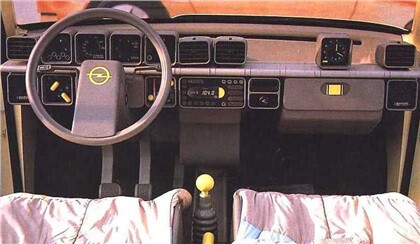 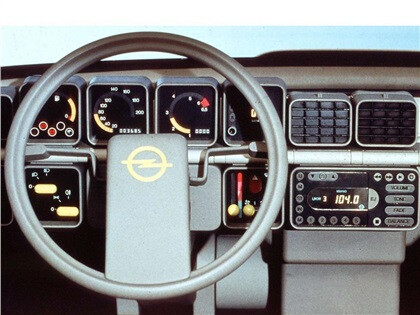 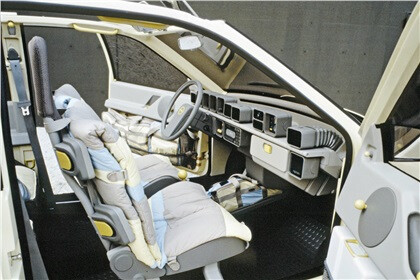 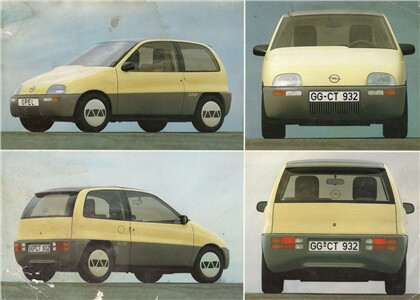 i wonder what are those wheels and who designed them