Why is this even in pro...it gets slaughtered

This should be in beginner…not pro, or experienced for that matter. It would make a nice beginner car, probably a group vehicle or VIP idk which one
like why is it even in pro
it would have slightly higher attack than the mustang in beginner with the sacrifice of a little defense, so why not?? 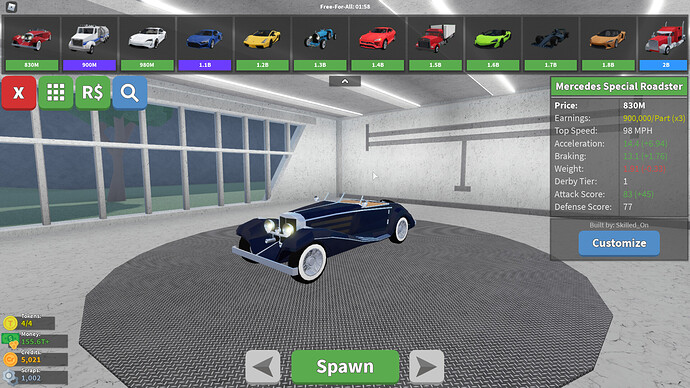 even more so, why the hell is the new tractor in pro? it’s literally a free kill

I was expecting it to be in beginner honestly
its like the sherpa but better. it would be better if it was a VIP tier 2 in beginner or something

well what are they suppose to do? remove the ability to use it in derby? There would be no point in that, as you know, no matter how weak a car is, you can still use it, and it’s a players’ choice, so they or you do not have to use it, whether or not you be in the pro rank.

I could also be misunderstanding what you’re saying, so tell me if so.

its stats are severely underwhelming to be in pro, or to be under such a price tag
I was gonna make a thread later on something that is more worthy of talking about and that some people other than me are rather irritated about

are you talking about it’s price tag? If so, it is one of many that is not very good at what it’s priced at.

yeah cuz everything in pro is a free kill…

If you fight them correctly yes, but I can’t win using this no matter how hard I try…maybe it’s me idk

yeah it maybe is you no offense btw

it is REALLY bad for pro though, I talked to other trillionaires in pro and they told me similar stuff about it like they think its dumb it is in pro
like honestly though 77 defense and 83 attack is basically unplayable in pro

that too though, like its just dumb
and the new tractor gets slaughtered as well, which would make a nice tier 2 in beginner

why won’t they just put all cars in beginner xD

would likely remain group though, because I get the feeling some monster tier 2 might be added to beginner, either a revamped TD, my Silverado, or something else so…idk

well they won’t there aer supercars which of course belong in pro, and then you have experienced where all cars have almost identical performance lol

I mean it makes sense that, well here hold on
I understand that there are these occasional things that get slaughtered in derby, like the ones mentioned here
you could easily counter that with, “but what about the peel and golf cart in beginner”
well, they cant go below beginner so they have no choice but to be there
they had a choice to put the type 35 and the special roadster, and the tractor down there but they didnt
I think the tractor should at least be in experienced or something but not pro
the other two, probably beginner, the special roadster probably being in experienced