King of the track

So you know that tower we have at the race track that serves no purpose? We can add a bunch of TVs or something on all of the sides like shown in this terrible drawing:

image1438×652 27.4 KB
And these TVs would show the current King of the track. They can be added in the lobby and in all the 4 rows as well.
These TVs would be kinda like the most wanted TVs in Mad city. 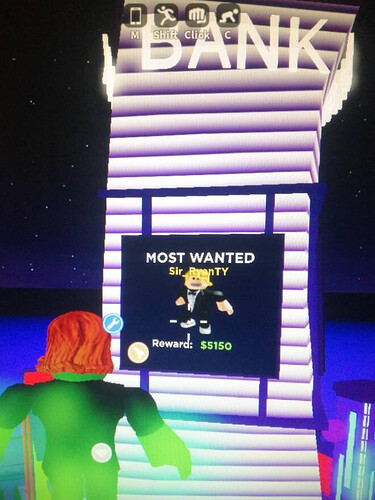 image660×880 102 KB
Basically King of the track is whoever is best at racing in the server. In a new server, there will be no King of the track, and the first person to complete a race with at least 2 people (counting them) and win is the King of the Track.
You can be dethroned from King of the track if you are King and lose in a race to someone. If there is 2 or more people who beat you in the race, the person who came in first will become the new King.
The King will get a King pay, which is 5 credits per minute.
On the lower part of the tower, there is a green button that says King challenge. Basically this will give a notification on the King’s screen that whoever pressed the button has challenged him to a race, and he can accept or decline. BUT…
If he declines, he loses his King pay.
If he declines twice in a row, he loses the crown.
The King challenge can be done once every 5 minutes or something, idk the time is up to you. And first person to press the button will be the challenger. You can make a King queue which will basically put you in line if someone is already racing the King or the 5 minute timer isn’t up. The first person to click the King challenge will be first in the queue, and so on.
When you win the King title, it will say Congratulations! You now have a chance to become the new King of the track for this server! Would you like to take your crown? and you can choose yes or no, depending on whether or not you want to just peacefully drive around or want to battle the server for the title.
To keep things fair, the challenger will choose a car for them both to use, and the cars will be stock, with no modifications. If it is a new server and there is no King yet, it is like normal and you can use any car.
The King can also surrender the crown at any time they want, and it will go to whoever he had taken the crown from. If they left the server, it will just be like it is a new server.
On the right of the screen it will show your King crown if you are the King, and if you click on it, it says do you want to surrender the crown? And you can pick yes or no.
Post your questions about certain scenarios and loopholes below and I will edit the document to answer them, and reply to you with a quote from the edited document.
5 Likes
TurboOnz12 December 19, 2021, 8:11pm #3