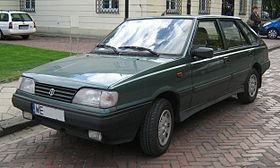 The FSO Polonez is a motor vehicle that was developed in Poland in collaboration with Fiat and produced by Fabryka Samochodów Osobowych from 1978 to 2002. It was based on the Polski Fiat 125p platform with a new hatchback design by Giorgetto Giugiaro. It was available in a variety of body styles that included two- and four- door compact-sized cars, station wagons, as well as commercial versions that included pickup truck and ambulance uses. Production totaled more than 1 million units excludin Th...