If add train and train yard with electric or diesel locos. Add ability to hold throttle power and speed at when button is left off. Basically untill you tap brake it holds throttle and because of its size its going to accelerate very slowly. Ability to make steam trains explode when pushed too hard for too long they give off warning signs when reaching critical speeds where the boiler is going to fail and release valves open and your acceleration is almost fully neutralize but can keep pushing to break the train.

Only consider this if map gets REAAAAALLLY BIG because if Roblox can’t handle a bigger map then scrap my idea here. Have a steam loco or electric one as a test I guess. Ramming into another person with a car with a train trying to stop would be fun to watch. Yes you got beam ng vibes from this and if its possible. Train isnt locked to the track so it can easily derail if track is deformed too much etc lol

I know trains have been suggested before but hear me out. I’m only talking about the cruise control and the ability for trains to disable themselves and end up off the track skidding on the grass into things and bunching up like aan oragami folded mess when hitting something too faast and just having tons of momentum. (This kind of physics can crash games if someone does it rightyou’ve got to be very careful about this idea) for example im using sort of the same train from polar express and the rails are slick. I pull the emergency brake and sparks fly from just under the wheels. I let off that once the pressure for reverse goes up and sort of spind wheels in reverse.(back because of the wheels on the rails and all the weight on it jams the wheels. It tilts and yanks off the track bunching up in the water next to the airfield. The grip of contact on the right side of the train as it leans and tries to back up while going forward aallllll caause the code to bunch up a tiny bit in the game since roblox is far from being stable with this. If someone so much as lags. The game can crash as the code bugs out from delays and clipping into the map… on electric cars your playing with amps and volts and stuff. On steam trains the raw piston pressure and power comes from PRESSURE. The better the pressure is delivered to the pistons. The better the power output of the train. Trains can explode if pushed too far and the roblox physics cant handle my example at all even if you tried to reduce laag. Its to many cars and such to bunch up it will crash any game.)

If you must then get a train with a max of 5 cars behind it filled with ore or coal. If anything you can have them as small passenger cars. Most of the trains today are not monorail super trains but are heavy movers and cargo trains(how else are we going to get stuff from one state to another. Traains came before cars lol)
There would then need nothing to do anymore with the actual train crusher and if there is a train. Bring avista truck into this by fricken adding the truck that can get on rails and drive like a train . Oh they are high rail trucks. Thats what they are called. Imagine having those tow that much weight and hitting the brake or hand brake will skid the tires on the rails. The problem is having trucks or vehicles wide enough to have the wheels on the rails and at the same time yeah.

I think I’ve said enough but honestly if they had any sort of trains in car crushers I think steam engines would be first onto the stage because they don’t cause as much lag as some of these other trains due to their lack in huge size. We dont need a massive gallery of trains. Three trains. Electricity, steam, other fuels. And if there is ever a track in car crushers. Expect someone to he hit by a train and a train to stop dead due to ping lol some people just wont move no matter how hard you ram into them. If this is added i dont know if im the only one that will love this but they GOTTA GET THROTTLE cruize control thing sorted out

how bout you type /cc and how fast you want cruise control to be at in the chat and cruise control turns on and turns off if you accelerate or brake
for example /cc40 would put u at 40 mph
the car would accelerate or decelerate to that speed
if u try to set cruise control at a speed ur car cant reach it will show text error that it will say error: car cannot reach speed
also /cc-20 is 20 mph backwards

Or, I don’t know, set a keybind to cruise control and have a small button for mobile users? 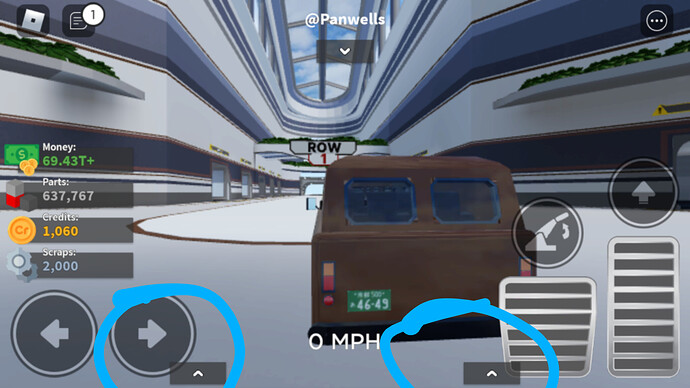 Dude, what he should add is TILT controls, where you can tilt the phone to turn the car.

Maybe Pan could move the stats to the top, that way there could be the button there and then a couple more